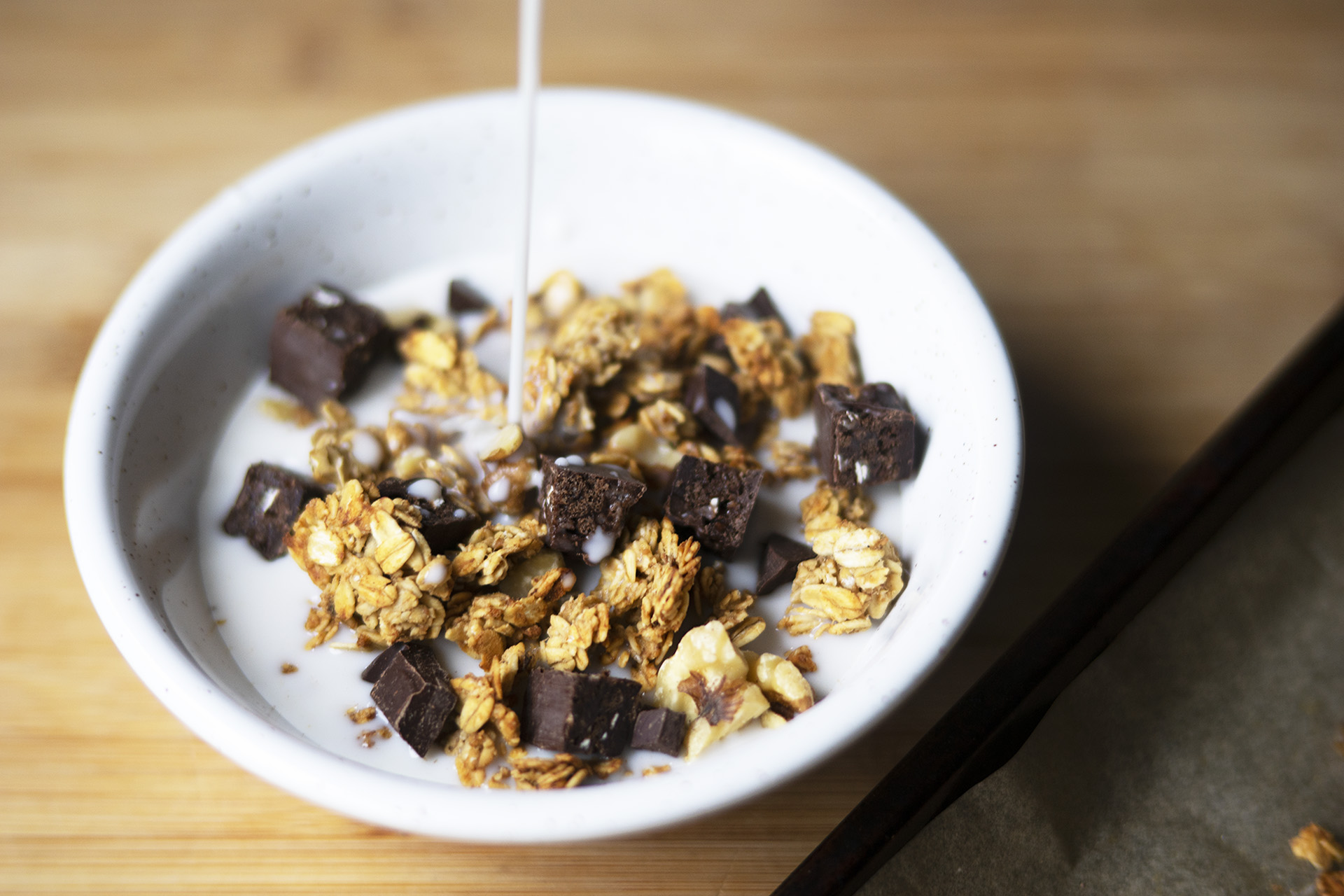 Things I’ve been thinking about lately:

What’s up with granola? It’s touted as a health food, or at least a *healthier* option than cereal, but, my findings have revealed, it’s still densely packed with sugar. Strangely, blatantly, paradoxical, isn’t it??

I have a deep love for granola; it is the perfect matrix of crunchy and sweet and savory. Sadly, granola is also a marriage of dessert and breakfast. I’ve looked long and hard, I’ve hunted every grocery store around me, and spent, collectively, let’s just say more than an hours time, perusing Amazon for a truthfully-lower-sugar granola brand. However, all of my expeditions have left me empty handed.

Sure, honey or coconut sugar make their way into many brands that tout themselves as *healthy*, but really, those words only serve to dress up the granola in a fancy facade, and make it’s consumer (i.e. me) feel better. At the end of the day, lesser processed sugar is still sugar (sad, I know). Is 2 tsps of maple syrup at breakfast such a big deal? Probably not, and I readily douse my pancakes in the golden syrup every chance I get, but I’ve also found that consuming sugar in what seem to be smaller increments throughout the day often adds up fast. What’s more, beginning my day with a towering bowl of granola that is layered with 4+ tsps of sugar only sets me up to crave more sweetness.

In my desperate search for gut-friendlier granola, I learned that the average amount of sugar per serving in store-bought granola (1 serving being 3/4 – 1 cup) was about  2 1/2 – 3 tsps, or 10 – 12 grams, of sugar! That’s already half of the recommended daily amount of sugar for adult women (which is 6 tsps, according to the USDA). I didn’t want to accept such dismal, pathetic information, and, feeling a little dismayed at the state of both physical and virtual granola aisles, decided to take matters into my own hands.

Alas, I stumbled upon this recipe, and a *ding* *ding* *ding* vibrated through my body; could this be the alternative to heavily sugar-laden granola that I’ve been searching for, but unable to conceptualize!?

At first I was skeptical, but let me break it down for you: the mashed ripe banana helps to bind the granola, and, as it bakes at a lower temperature for longer, the waters from the fruit evaporate, leaving you with a sheet of golden (very much edible) puzzle pieces, and a lovely banana bread smell. Initially, I was not convinced that this recipe would be capable of producing anything close to traditional granola, but I was very, splendidly, wrong.

In answer to the foremost burning question of the day, yes, it has CRUNCH. It also has flavor that surpasses simply SWEET; the toasted, though subtle, banana bread flavor will shine through so long as you use heavily ripened bananas (i.e. so speckled that they are almost completely black. You may be a little frightened and think they are rotting, but trust me, they’re just developing more flavor and sugars).

Just like any other kind of granola, it can be altered to suit your fancy. Aside from the banana, which is essential for replacing the usual sweet binders, all of the other ingredients can be swapped out for similar alternatives! I was feeling extra childish and decided to fully embrace the presence of banana; what else is banana-friendly? Ah yes, that strange Ben and Jerry’s ice-cream flavor (i.e. the abominable one with fruit in it). I was never a fan of banana in my ice-cream, but I have always been a fan of chunks of chocolate (and more specifically, BROWNIE), but who isn’t??

Because banana pairs so perfectly with another one of my favorites, peanut butter, I decided to incorporate the nut butter into the mix, while cutting down on some of the usual oil in the process. If you’re not a likewise nutty PB fan, fear not; simply replace it with a nut butter of your choice, or use a couple tbsps more oil to make up for the lost fat (in other words, don’t drastically cut down on the fats! Fat makes things taste very good, especially when there isn’t as much sugar in the picture).

On a last, and arguably most important note, know that there are enough brownie bits to ensure no fighting will ensue over the distribution of the granola (backup context: I am the middle child of 5)!

Preheat oven to 320 F. In a large bowl, mash the bananas with a fork until there aren't any inordinately large chunks left. Whisk in (you can simply use a fork) the peanut butter, melted coconut oil, maple syrup, and vanilla extract, until well combined. Next, add the oats, cinnamon, and salt directly to the bowl of wet ingredients (it will resemble a little mound). Lightly mix together the small heap of dry ingredients before fully incorporating into the wet mixture.

Line a baking sheet with parchment paper, and use a spatula to spread out the granola into a sheet of relatively even thickness. Bake on a lower rack in the oven (bottom third) for 30-40 minutes, stirring every ~10 minutes, and removing from the oven once the oats are mostly golden brown (but not yet burnt! Be sure to check on them at the 30 minute mark, as oven efficiency can vary greatly).

Allow to fully cool on baking sheet (i.e. forget about it for at least 30 minutes) so that it can further gain crunch before transferring to a resealable container for safe keeping (until breakfast that is).

This banana-sweetened granola idea was inspired by/loosely adapted from Youtuber Nina Montagne's recipe, which is featured in this video! 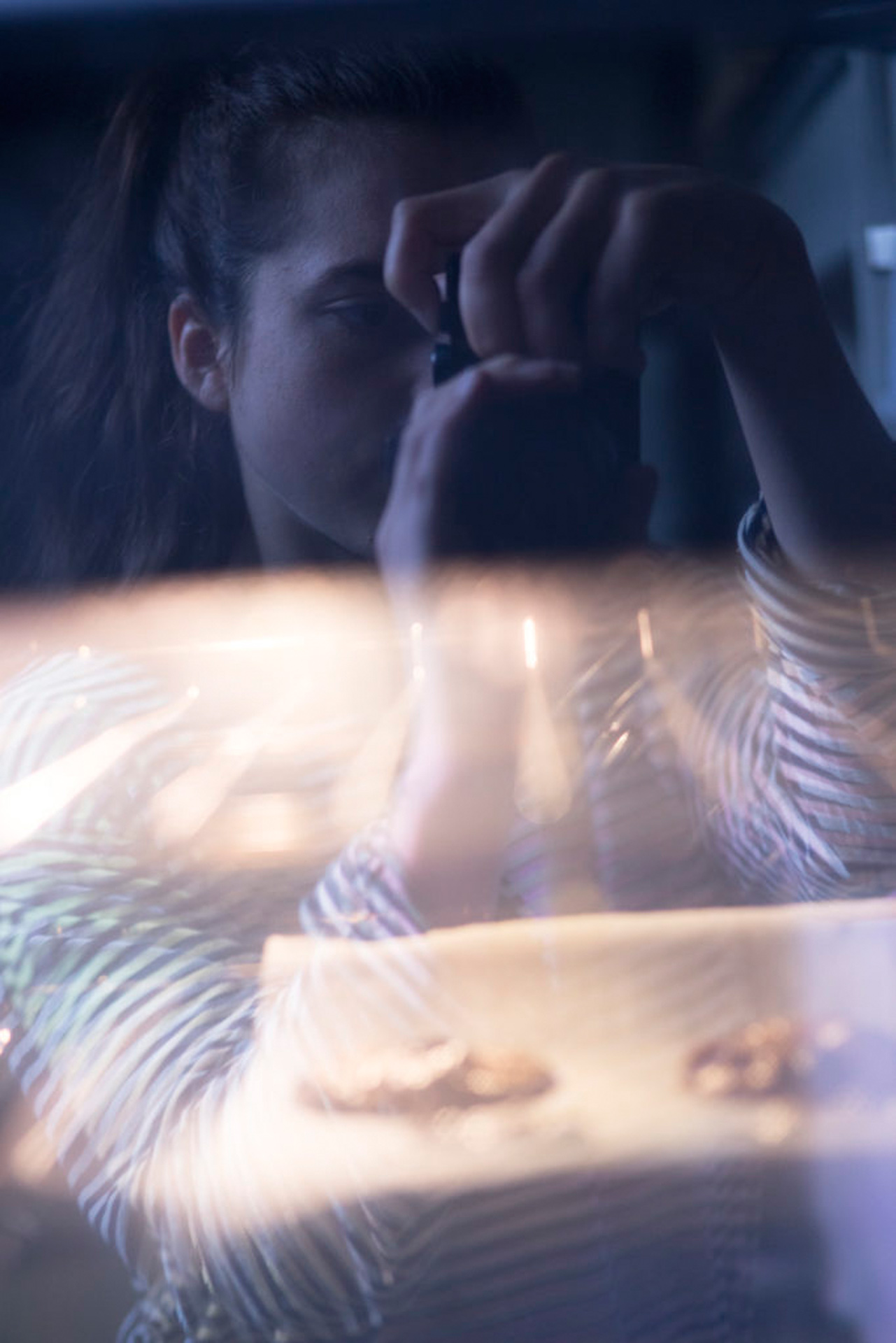